Is Occupy Philadelphia Facing a Crossroads?

The march starts off right on schedule. A group of 40 or so protesters stage under the imposing shadow of City Hall at Occupy Philadelphia on October 23rd, and then cross 15th Street, winding through Center City, repeatedly chanting: “It’s a reality! Stop police brutality!” They then take the street, careful of oncoming traffic as they lock arms and maintain their path within the oncoming lane. Philadelphia Police cars escort them through the streets. Onlookers pop out of store fronts and pedestrians stop mid-stroll to record the small, vocal group as they move up Market Street past the Convention Center through Chinatown.

Their purpose, eventually released in a statement later that evening, is to highlight the issue of police brutality. Protesters tell personal stories of police malfeasance: one girl talks about how she was essentially ignored by officers after she went to a police station to report that she had been sexually assaulted. Another woman, who had watched a late night news report on the protest, stops by to share another heart-wrenching story about Philadelphia police officers beating up her grandmother and son, and after realizing that they had entered the wrong house, lied about the law enforcement agency with which they were affiliated.

The protesters also include in their statement the belief that police forces across the country are used to crush nonviolent occupations, and in so doing, protect the interests of the elite. 16 are later arrested the next morning after a night long sit-in on 8th Street in front of police headquarters. It marks the Philadelphia occupation’s first act of civil disobedience since it began in early October.

The march only garnered less than a quarter of the occupation’s population. This could be chalked up to the last-minute nature of the march, and that many on site were not aware that it was National Day of Action Against Police Brutality. A low turnout isn’t necessarily surprising when these factors are taken into consideration.

Yet the controversial action highlights something of a dilemma for the occupation here in the City of Brotherly Love, and this stems from the much-lauded relationship the administration has forged with the protesters. On its face, this appears to be a very good thing. No one has been injured or killed and the city has not been disrupted in any significant way. It’s a very positive anomaly in a sea of reports about police brutality against protesters. But it may pose a problem for the growth of this movement here, as the number of occupiers appears to have leveled off and a potentially difficult winter approaches. There are some characteristics about this very different occupation worth considering.

The prevailing wisdom at Occupy Philadelphia appears to be: Do not disrupt the relationship with the authorities to avoid a crackdown and public backlash.

The history of the Occupy movement has shown, from New York City to Boston and Oakland, that nonviolently challenging police, be it through trying to hold ground staked out for occupation or other bold acts (such as taking the Brooklyn Bridge) tends to balloon the number of supporters and participants. Does this “model” work for Philadelphia, however? 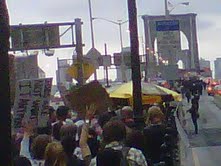 It is important to note that in every case, what went hand-in-hand with this nonviolent militancy, be it New York City or Oakland, was the brutal, sometimes violent tactics the police employed against protesters. This without question horrified many Americans, which likely grew sympathy and support from the public.

I have also heard speculation from a number of protesters here at camp that the city’s largely hands-off approach to the occupation is a tactic born out of a need to influence public perception of the administration itself. This is certainly not a far-fetched theory. By not acting in a reactionary manner, it’s possible city officials have essentially contained the movement here, and left the occupation in a difficult position: Do we nonviolently escalate and risk losing public support, giving even more support to the police, or take the chance that bolder, nonviolent direct action (challenging the police in the process) might just grow the movement?

So if the Philadelphia occupation decides to become bolder–not just marching, but holding sit-ins at banks and the Philadelphia Stock Exchange, as hypothetical examples–what would the police response be to such actions? One obviously can only speculate, but judging by how the police department handled the sit-in at their headquarters–allowing the protesters to stay for an astounding 18 hours–they may not employ the violent responses we’ve seen in Oakland, New York City, Boston, and other cities. Mayor Nutter is facing re-election soon and may not want to risk upsetting union support. It’s possible the administration has also taken note of what happens when occupations are antagonized, and may be fearful of major public backlash, unlike Denver, who launched one of the most brutal crackdowns since the events in Oakland. The administration’s tone may also change after Nutter’s re-election too.

Only time will tell how both the occupation and police move ahead.

The Project will continue to bring you reports and editorials on the #Occupy movement, with emphasis on events from @OccupyPhilly. If you have photos, writing, artwork or music with a focus on the Occupy movement or with protest culture in general, don’t hesitate to send it to DGP. We’d love to share it with the world. Thanks so much for your continued support and and if you’re new to the Project, welcome!

This entry was posted on Tuesday, November 1st, 2011 at 6:34 pm and tagged with #OccupyOakland, #OccupyPhilly, #OccupyWallStreet, activism, Brooklyn Bridge, brutality, NYPD, Occupy Philadelphia, police, politics and posted in Editorial, News/Report. You can follow any responses to this entry through the RSS 2.0 feed.
« What the Occupations Have Taught Me: Lose the Fear
A New Chapter for Occupy Philadelphia »

5 responses to “Is Occupy Philadelphia Facing a Crossroads?”