Is It Time to Occupy Big Media? 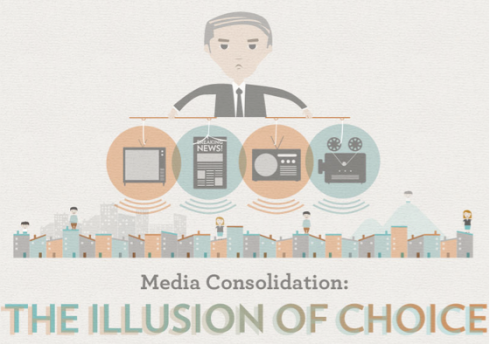 “Between the public sector and the private sector, we have wreaked untold havoc on the media environment.”

These aren’t the words of a progressive media advocate such as University of Illinois professor Robert McChesney or The Nation’s John Nichols, but of ex-FCC commissioner Michael Copps in January. In an interview on Democracy Now!, Copps attributes his claim to “the abdication of public interest responsibility by the FCC” over the last 30 years and their failure to enforce public interest guidelines and a stronger focus on news.

Here’s another example of how the FCC has failed in their responsibility to the public good: In 1995, the FCC forbade companies ownership of more than 40 stations. Clear Channel Communications now owns over 1,500. This rate of consolidation clearly shows no sign of slowing.

The closing of news rooms and the number of reporters on the street instead of the beat goes on as the corporate state continues its relentless and undemocratic consolidation of America’s media landscape. Layoffs continue despite a number of companies like McClatchy posting a 21% profit margin, according to the book The Death and Life of American Journalism. McClatchy fired a third of their newsroom staff in 2008.

“25 or 30 years ago, only 50 companies controlled more than half of what we see and hear every single day. Now, that 50 – which was alarming enough – has shrunk to six or even five,” says Johnathan Lawson, the co-founder of Reclaim the Media. Rupert Murdoch’s NewsCorp owns the top newspaper on three continents: The Wall Street Journal, The Sun, and The Australian. According to a 2008 GAO report, the company was operating over 150 subsidiaries in off-shore tax havens. How much of those subsidiary holdings could have gone to funding NPR, or towards community initiatives to help expand minority media in communities?

The assault on our airwaves first began in earnest in 1980, when “the FCC did away with public interest guidelines for broadcast television licenses, and the renewal period went from three to eight years,” according to Copps. Now all a broadcaster has to do is “mail in a postcard” and their license is renewed, because the FCC – against the very reason it was created – has watered down attempts to ensure that the public’s airwaves are by-and-large for the public good.

Michael Powell (son of former Secretary of State Colin Powell), who was the head of the FCC in 2003, attempted to eliminate 30 year-old rules that prohibited any television network from reaching more than 35% of the national population. These rules were, in part, created to prevent the homogenization of news and to ensure that there was an attempt at quality local coverage. Predictably, the broadcast industry spent $249 million attempting to convince the federal government to allow new rules which would expand that limit to 45% of the public. And they won.

Fast forward to 2006: the FCC passed rules “which allowed broadcast-newspaper cross-ownership in the top 20 markets,” as Katy Bachman wrote in AdWeek. “The last thing Federal Communications Commission Chairman Julius Genachowski [who became the FCC head in 2009] wants to talk about are the media ownership rules.”

A media system dominated by such a narrow coterie of owners has a direct impact on the quality of news presented to the public – affecting a diversity of viewpoints as well as the depth of coverage on issues such as corporate greed, poverty, corruption, racism, climate change and a host of other topics that an electorate needs to know in order to make educated decisions which directly affect their lives.

One major casualty of corporate domination of news is investigative journalism. Be it in print or in broadcast news, this time-intensive and not always profitable aspect of news is crucial to a healthy democracy. One need only look, for instance, at the media debacle of the Iraq War to see how the corporate state perverts information consumed by Americans. The first Gulf War was a huge boon for corporations like GE, which turned nightly news into “a media hardware show,” as Amy Goodman of Democracy Now! stated. GE had a significant stake in the production of parts for many of the weapons in the Persian Gulf war.

The shrinking of diverse views on war was evidenced by the firing of MSNBC host Phil Donahue in February of 2003. He approached the invasion from a critical perspective and maintained the highest rated show on that network. The killing off of diversity is also a perfect example of how corporate media perpetuates the concept of “just” wars to increase profits, as GE’s role in the Persian Gulf war and the reporting on that war and Operation Iraqi Freedom demonstrate.

Media consolidation also plays a profound role in how our society prioritizes values, from self-esteem to consumerism. “It gives them [corporate media] a great deal of influence over how our culture thinks about itself,” points out author and activist Anne Elizabeth Moore.  The deluge of advertising, for instance, which takes up a lot of broadcasting and radio, certainly has an impact on shopping habits as well as more serious issues like body-image.

Enter Occupy Wall Street. The movement has set its sights on corporations and the elite who continue without apology to commodify health care, public education, and other vital necessities, and has subsequently kicked issues like income inequality and corporate greed back into the national conversation. Some even argue that President Obama’s recent State of the Union speech carried a hint of the spirit of the movement, which isn’t surprising in an election year.

How would corporate media respond to civil disobedience in their lobbies? What would happen if a group of protesters went to a news station and demanded a revoking of that outlet’s license? This is what happened in the WLBT case, when civil rights activists challenged a racist broadcaster and ultimately forced a judge to pull the station’s license for not serving the public interest.

If the people are going to stand up to big banks and corporations for wrecking our economy and destroying our environment, the theft of our airwaves and newspapers must not be ignored.  As each occupation tackles issues local to their cities and towns – such as police brutality in minority communities – directly challenging broadcasters and newspapers through sit-ins or other creative tactics to cover issues that aren’t properly covered by major media could be a good start. But that would just be the beginning.

One Occupy Philadelphia protester sums it up best:

“It’s bullshit that our country’s main source of news is owned by a few large corporations that have a GLARING conflict of interest in providing us with accurate, honest information.  They have an agenda both in downsizing news rooms as well as promoting certain political views.  It’s time for us to hold them to account and demand a true separation of corporation and government, both in the running of and in the reporting of.”

This entry was posted on Saturday, February 4th, 2012 at 3:02 am and tagged with ABC, Amy Goodman, CBS, corporation, diversity, FCC, Fox News, GE, investigative journalism, Julius Genachowski, media, Michael Copps, Michael Powell, MSNBC, NBC, news, newspaper, Occupy Philadelphia, Occupy Wall Street, Rupert Murdoch, television, WLBT and posted in Editorial, News/Report, Other Media. You can follow any responses to this entry through the RSS 2.0 feed.
« #OccupyTheCourts Gets Tense in Washington D.C.
How to Radicalize a Moderate: The story of a former OP City Liaison »

One response to “Is It Time to Occupy Big Media?”