The Commodification of America

Editor’s note: Guest writer John T. Marohn (@johntmarohn) was kind enough to allow the Project to republish this excellent piece on the commodification of America, wherein he asks the crucial question: “Is America for sale?”

“The social responsibility of Business is to increase profits.”
– Milton Friedman

“First amendment never shows why freedom of speech…did not include the freedom to speak in association with other individuals, including association in the corporate form.”
– Supreme Court Justice Anthony Scalia in Citizens United v Federal Election Commission

There it is folks. The American way: Profits. Corporate free speech. Other people’s money.

There is little doubt that America has become the global symbol for upward mobility, profits, and economic success. But we have also become the global capital of commodification in all of its forms, including prisons, education, health care, and, more cruelly, in our political arenas.

There are few institutional venues in the United States that aren’t, in some way, touched—some would say tainted—by the profit motive. Politicians curry favor with the wealthy who contribute to their campaigns. The health care system continues to be driven by ever increasing profits. The national defense budget has become so entrenched with defense contracts that it would be safe to say that United States Defense is an industry in and of itself.

And some of the top universities are run as corporations with heavy endowments, investments in the stock market, and huge government grants. Not to mention the sports industry that dominates the budgets of many very wealthy universities and colleges throughout the United States.

Who would have thought that we could have moved from an innocent laissez-faire economic model that still works well in the small local merchant world to a sprawling octopus of big-business and global corporatism running through every artery of our society.

Is America really for sale? It seems so.

I live in a small urban area in Western New York. Almost every day, I stop at one particular intersection that has a long wait at the traffic signal (there are at least six or seven traffic lanes the traffic light has to accommodate). If I’m in the south lane of traffic, I get a chance to see one billboard, conveniently placed on top of a two-story building.

It is always an ad about a particular hospital. The latest ad makes the claim that the hospital successfully treated more strokes than any other hospital. I wasn’t sure whether the hospital meant that stat to apply to the whole world, in Western New York, in the state, or throughout the United States.

I was not comforted by the fact that the hospital is scheduled to close within a year. I could only assume that, before the hospital goes down, it wanted to make one last foxhole effort to redeem itself from anonymity.

I also suppose that if I felt a stroke coming on, I would quickly flash back to my intersection stop, the billboard sign would pop up in my Pavlovian mind’s eye, I would call 911 and have the ambulance take me to the hospital’s emergency room. Ah, the power of advertising.

It is impossible to escape ads on television. The pharmaceutical and health-care industries are two of the many blatant users of the television ad industry. Marketing, of course, is the name of the game.

And marketing is not so much about “actual” competence as it is about the “image” of competence. Americans are supposed to believe, in theory anyway, that if an ad, especially a big billboard ad, says a health-care provider is good, then it must be true.

My point here is that the commodification of the health care industry is not just about health insurance premiums, deductibles, copays (all business terms, by the way); it is also engaged in the pro-active marketing industry.

And the commodification of health insurance is so widespread that Americans begin to believe that the privatization model is the only model that has any credibility. It becomes extremely anxious about even discussing Medicare-for-all paradigm because the health insurance industry controls the narratives in employer-sponsored health insurance policies, in the group plans strategy, in television and other media advertising, and in the lobbying halls of Congress.

Americans have bought the insurance model for health care, not just because it is necessarily better model, but because, in theory, it is supposed to “insure” the patient that they won’t be saddled with a financial medical burden. That is the purpose of insurance: to protect a consumer from financial ruin by having an insurance plan. And the insurer hopes that not everyone in the plan needs to cash in at the same time.

However, “insurance” is a business. Businesses need to make a profit. Profits cannot take a back seat to expensive medical procedures that have the potential to put them out of business. So, you can be sure, a profit-driven company is going to do everything it can to scrutinize, stop, or delay a payment to a doctor or a hospital, especially if a procedure does not appear to be “cost-effective.”

Insurance, as Americans have come to know, is definitely a business. It is very much like having a debit card. A customer puts money into the premium. The premium is stored with other customer premiums. And the insurer holding those premiums pays a doctor or a hospital from those premiums after reviewing the doctor or hospital’s bill for a procedure, an office visit, an operation, or a test. 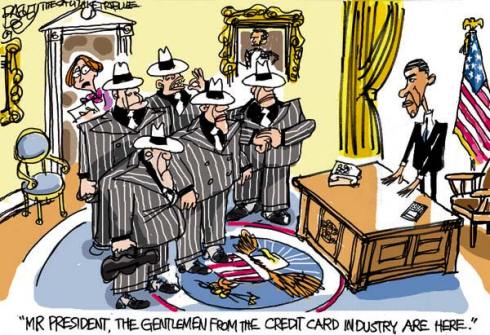 Cartoon by Daryl Cagle and the Salt Lake Tribune.

Credit, the more sophisticated capitalist term for money that’s available to borrow, has also crept into the higher ed business. Students generally take out loans from the federal government or a bank. The total amount of those loans has begun to rise in the US and graduating students are now confronted with a jobless work environment and a student loan to pay off.

What about politics? Well, the evidence, to most Americans is pretty well known. Lobbyists spend an awful lot of money in Washington to plead their cases. And the corporate world has now won a victory with the Citizens United case which allows corporations, unions,and non-profit political fronts to pour unrestricted amounts of money into media advertising. This, of course, is a variation of buying influence. After all, campaign money is not just about supporting a candidate; it is also a way of trying to convince a candidate to vote a particular way.

There is no doubt in my mind that the Occupy Wall Street protests are all about a capitalist/corporate/business-model system that is out of control. When politicians can be bought, when health care has become a very expensive business, when our college education system has become burdened with rising student debt, when some of our prisons can be owned by shareholders, when the business model of running a country has seeped into the country’s pores, on all levels, this younger, very articulate group of protesters are beginning to see how deep and wide the cracks in capitalism really are.

Let us hope that we can find alternative ways to vote on public policy in America, to educate our youth, and to give reasonable health care.

3 responses to “The Commodification of America”